Snakes just like many other animals utilize the riparian area along rivers and streams as a habitat. They use these areas to hunt for prey and to den. Without the riparian area snakes would lose valuable habitat and would not be able to travel easily along the river. Riparian zones act as a valuable connection between the river and other habitats. While many people don’t love snakes it is important to know that they play a valuable role in ecosystems. Without snakes, other animal populations would grow rapidly without snakes to keep populations in balance.

Range in Tennessee: Western two thirds of the state.

Length: The average range is between two and four feet, but the largest recorded Midland Water snake was 59 inches.

Description: This heavy bodied snake species is most distinguishable due to the darker brown or reddish cross bands that start below the head. There are less than 30 of these bands on this species and they are all separated by 2.5 dorsal scales. The belly of this snake is yellowish in color. Juvenile snakes are more vibrant in color and with age the colors start to darken.

This snake is frequently confused with the venomous cottonmouth. The easiest way to differentiate between the two is that cottonmouths have larger more triangular heads, and two pits between the eyes. Midland water snakes have rounder heads and are more often lighter in color.

Range in Tennessee: common across the state except in the northeastern corner.

Length: The average range is 22 inches to 32 inches.

Description: The Rough Greensnake is a very thin snake that is an excellent climber. Juveniles can have a grayish color but with time it turns to a light vibrant green. This snake is commonly found in areas of think vegetation along stream and lake banks. This snake is sometimes referred to as the vine snake because they will spend much of their time hanging from tree branches waiting for prey. Their diet consist of larger insects like grasshoppers, dragonflies, and spiders.

Range in Tennessee: Occurs statewide with the exception of the northeastern corner.

Length: The average range is between 36 inches and 48 inches.

Description:  This large bodied black snake is found in a variety of habitats across the state from thick forest to river banks. It can easily be identified because of the yellow crossbands or spots along its body. This snake, while not venomous, is very dominant. It will consume all sorts of prey including rabbits, squirrels, birds, and other snakes. It was given the name Kingsnake because of its ability to kill and consume venomous snakes. This ability is very beneficial to the ecological health of our ecosystem and our safety as humans because they help keep the number of venomous snake from growing too much.

Range in Tennessee: Occurs all across the state and is one of the most common snakes in the state.

Length: The average range is 42 inches to 72 inches.

Description: The Grey Ratsnake is a large snake that can range in color from brown to dark black. The juveniles are grey with more distinct black blotches.  The belly of this snake is white underneath the head and gets darker as you move toward the tail. It is not a picky snake when it comes to habitat. They can be found in any dark area including wood piles, hollow trees, under rocks, and in barns. They commonly feed on birds and rodents that they kill by constriction.

Range in Tennessee: Found in the western half of the state, and are more common in the far western region.

Length: The average range is between 30 and 42 inches, but occasionally they can grow much larger. The longest cottonmouth ever recorded was 7 feet long.

Description: The Cottonmouth is a thick, long snake that is venomous. The juvenile snakes are easily identifiable because they have a yellow tipped tail. As they age this yellow tail will fade away. The coloration of the adult snakes can vary. The most common colors are black or olive brown. The younger snakes do have visible crossbands but with age these bands become harder to notice. The Cottonmouth is the world’s only semiaquatic viper and are almost always found near a water source. These territorial snakes will display their pasty white “cotton” mouth when threatened.

What to do if you run across a snake:

The most important thing to do if you come across a snake is to not panic. Snakes are not vicious creatures that hunt or chase humans. Snakes would rather not encounter humans at all, and will only strike out or "attack" when they feel cornered or threatened. It is best to step back and away from the snake to give it space. It will most likely try to slither off to escape to the nearest cove or bush, so make sure you don't block it's exit. A majority of encounters between people and snakes are with non-venomous snakes. It can be important to know how to tell a non-venomous snake from a venomous one to know if it is safe to be around or move. Below is a graphic and notes on how to ID a venomous snake. Though the best method if you cannot for sure ID a snake is to leave it alone and or call a wildlife removal service to remove the snake safely if it is on your property.

How to tell if a snake is venomous or not:

In Tennessee there are 4 venomous snakes that can be found that are all part of the pit viper family. They are the Copperhead, Western Cottonmouth, Timber Rattlesnake, and the Western Pigmy Rattlesnake. All of these venomous snakes have these distinguishing features: 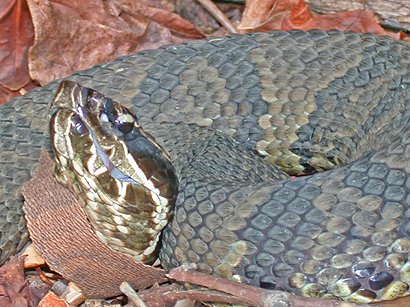 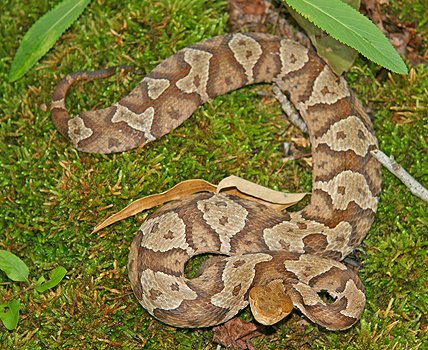