RSS feed: RSS is a web feed format used to publish frequently-updated content. Use this feed in an RSS reader or browser (Safari 2, Firefox 2, or Internet Explorer 7 and higher)

State Issues Stricter Permit to Franklin on Withdrawals from the Harpeth

The TN Department of Environment and Conservation (TDEC), City of Franklin, and HRWA announced the issuance of a new state permit with tighter conditions on Franklin's withdrawal of water from the Harpeth.  (see joint press release).   This permit incorporates some key changes HRWA had recommended based on our analyses that will improve protection of the Harpeth and enable better science-based decisions. These include:

Equally Important, scientific understanding of the ecological effects of flow alterations has advanced.  During its review, TDEC stated in joint meetings this spring that the minimum cutoff limit in this permit needs to be analyzed.  As a result, TDEC is funding continued scientific work in establishing river low flow thresholds that will enable the permit conditions to be re-evaluated as soon as the work is available.  This permit also includes a "reopener" clause to enable timely adjustment of the permit based on new information.   (see HRWA permit comments for more.)

Important changes means that there is less river water available than before for the city during the "low flow season," and changes that could further limit withdrawals during the summer could be forthcoming relatively soon. 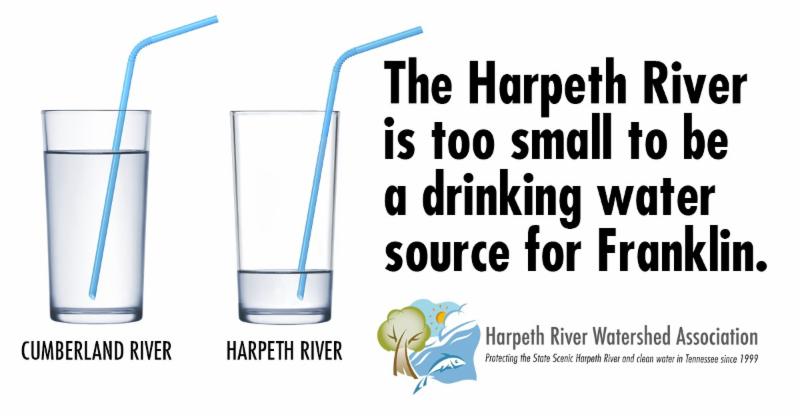 TDEC did not review the economic feasibility of the city continuing to have its own drinking water plant.